He recently acquired new studio premises for a new car restoration TV show and when it came to fitting it out with electrical accessories, lighting and security products, Tim Shaw, a long-time fan of Scolmore products, opted for solutions from across the group.  Click wiring accessories, Ovia light fittings, plus door access, emergency lighting and fire detection products from ESP, have all been installed in the two floor studio which has been specifically designed by the TV presenter and will be where certain episodes of his show are filmed.

In the new show Tim will be doing what he is most well-known for – restoring classic cars.  However, this time it will be with the help of their owners.

The studio has been kitted out with the very best equipment in the automotive industry and according to Tim, the Scolmore Group products were on a parr - with their exceptional quality, high performance and reliability noted.  It was also the speed and ease of installation of the products that impressed Tim.  Having originally quoted for the time it would take to do the whole installation job, the electricians involved were able to complete the work in a third less time, thus providing a saving not only in time but costs – vital on any job.

Just inside the entrance to the studio is a bank of Click metal clad wiring accessories which have been installed to control all the lighting throughout the studio. The GridPro modules featured in the 6-gang plate allow Tim to control specific sections of the lighting as required.

For Tim, it is all about the aesthetics and using the Scolmore items in an unusual way that works particularly well for TV.  He wanted to ‘celebrate’ the products rather than hide them away, as is often the case with electrical accessories.  With this in mind the metal clad switches and a range of sockets have been fitted at a raised height on the walls with the conduit to provide an eye-catching, industrial style look.

Standing in the middle of the studio gives a view of the range of lighting that has been installed and again, Tim has adopted an unusual approach to fitting the Inceptor U-Lite slimline linear LED luminaires.  Normally hanging from the ceiling, he has opted to install the Inceptor U-Lites in an upright position on the walls, which he says adds a sense of scale but also enhances the lighting when working on the cars and has really helped with a specific task of identifying dents in the cars.  He was also impressed with how easy they were to install – “even I could fit those,” he said.

The U-Lite was designed and developed as the ideal retrofit replacement for single and twin-lamp fluorescent fittings.   There are 24 variants in the range, and they come in a range of lengths and in standard, microwave sensor and emergency models.  The transparent frosted polycarbonate cover dispenses light outward with an even spread of light.  As Tim discovered, wiring and installation of the U-Lite is quick and easy using the piano type 5-pole push fit terminals.   By integrating the diffuser and gear tray and anchoring them to the base, the U-Lite ensures a hassle free installation without the need to fully disassemble the product to mount and wire it.

A number of Inceptor Slate backlit panels have also been fitted unconventionally, hanging from cable trays rather than as panels fitted into the ceiling.  Again, Tim was keen to make a feature of the lighting products rather than just to provide a solution.  A couple of electricians who have been helping in the studio hardly noticed the luxury cars and high-tech equipment but were drawn to the Inceptor Slate panels and the way there were installed.  They were keen to photograph them as an ideal option for some industrial settings they were working on.  These TP(a) rated backlit panels have a low, <19 UGR diffuser, which produces a spread of light that is natural and warm and helps to reduce shadows, an important consideration when filming is taking place.   Its pre-wired push-fit 3-Pole Flow connector also make for quick and easy installation.

When it comes to the Flow lighting management systems, most people will tend to hide these away in cable trays or in ceiling voids.  Tim has opted to mount them on the wall, with one or two of these systems per floor of the studio.  “Using the light distribution box and the flow connectors, means you can’t get it wrong, it’s so easy to do, with as many lights as you want plugged into one board, it makes cabling and the whole job much easier.”

Twin Spots from ESP’s Duceri emergency lighting collection have been used to provide vital back up in the case of a power outage.  They offer three hours emergency duration, with charge and discharge protection, and feature a vibrant green LED battery charge indicator and push to fit wiring terminals for ease of installation.

The fittings have been tested to meet BS EN 60598-2-22 Standards (requirements for emergency luminaires), with lumen data independently verified and photometric files available for each lamp head to produce affective lighting design for open areas.

With a studio full of expensive cars and top of the range equipment, a key consideration has been the protection from fire and theft and this is where ESP’s security products came into play.  Providing fire protection is the MagDuo two-wire fire alarm system – a highly flexible and adaptable system that is designed to save time and money on the installation process.

Again, this is another product that Tim’s electrician was very impressed with and he managed to fit the whole system in about an hour. Two-Wire fire alarm systems are based on standard conventional system technology. Unlike standard conventional four wired systems where the detectors, call points and alarm devices for each zone are wired on separate circuits, MAGDUO utilises intelligent Two-Wire technology, which allows all devices to be wired on the same set of two-core zone cables back to the control panel - enabling it to use a single circuit per zone both for detection and to power the sounders.  This advanced technology can reduce both installation and material cost.  An essential component product for the MAGDUO Two Wire Fire System, and one which Tim was particularly keen on, is the FlexiPoint detector device which brings a high degree of flexibility, versatility and convenience due to the inbuilt programmable options it offers.  As well as offering 7 different modes of fire detection including combined heat and smoke, the FlexiPoint detector is also available with an inbuilt sounder or inbuilt sounder strobe, which will assist with a compact install solution (as the detector and sounder is all-in-one as opposed to separate units).

CCTV cover is provided with ESP’s Rekor IP system.  Having looked into options quite late in the fitting out process, Tim was relieved to find that he wouldn’t need to send power to each camera, with the cabling requirements that it would involve.  The Rekor IP 2 Megapixel range features POE (Power-Over-Ethernet) which enables the camera and power feed to be wired in Cat5e cable up to 100m without the need for additional power, which makes installation much more convenient.  A single Ethernet cable provides both the power and the HD digital feed, with just one cable per camera and multiple cameras can be installed anywhere on the network that the NVR is connected to. The NVRs are packed with features, such as remote monitoring via the ESP View App, H265 compression, motion record activation and they’re supplied with quality surveillance hard drives for peace of mind.

With the ground floor of the studio complete and already being used for filming, work has now commenced on duplicating the facilities on the second floor.  Tim is keen to reiterate his key reasons for selecting products from across the group:

“I’ve worked with Scolmore and a variety of products over the years and have always considered the company to have its finger on the pulse when it comes to innovation.  They continue to come up with new and improved products that make the whole installation process as simple and speedy as possible and that in turns means reduced outlay.  With such a vast array of products from under one roof, it really is a one stop shop for everything you need in electrical accessories.  Everything looks good and performs superbly and for me, it’s been great to fuse the functionality of the products with my keenness on the overall aesthetics and achieve a look that works brilliantly for TV.” 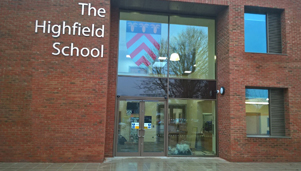 Back to school for Scolmore

Mode and Mode Part M sockets, as well as MiniGrid switch modules have been fitte... 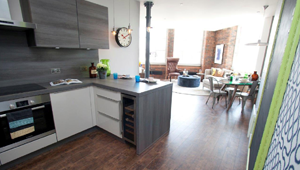 We have played our part in the final phase of this redevelopment, supplying stat... 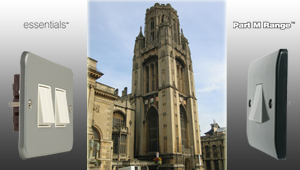 Chosen for state of the art university facility

Scolmore’s Part M collection has been installed in conjunction with products f...